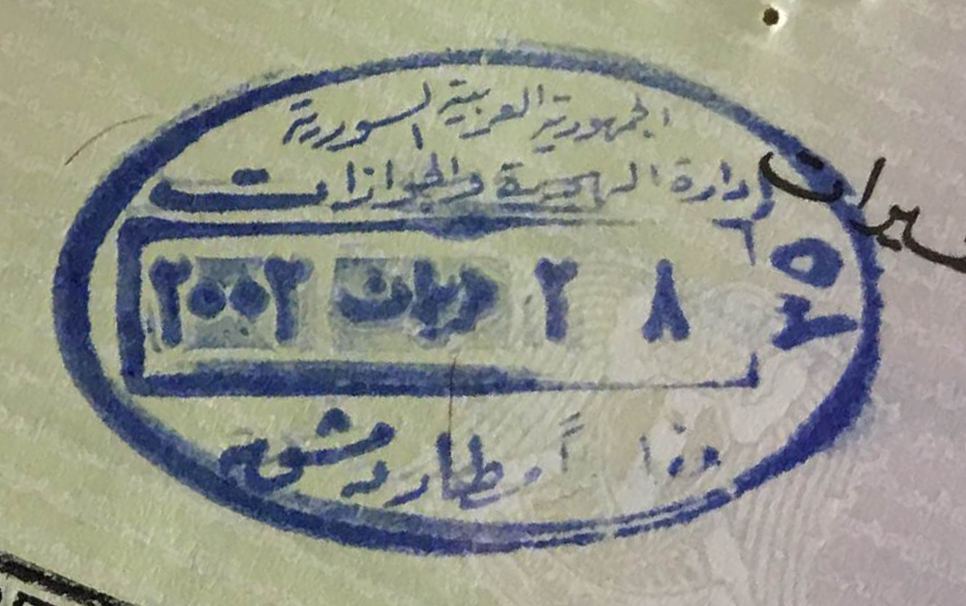 Earlier in the week I was looking for some new restaurants / countries to take the culinary-passport when I stumbled across the Golden Bakery in Charlotte.  It is a bakery owned and operated by a Syrian family and it looked like they had some items I wouldn’t be finding just anywhere.  After making the drive to Sharon Amity rd. I found the bakery in an old strip shopping center.  There are a couple of other ethnic restaurants sharing the parking lot with it and a middle east market next door.

When you walk into the bakery you see the counter and display cases to the left, a couple of café tables in the small area in front of the cases and a pass through into the market next door on your right.  I considered grabbing something to eat there but the tables were both occupied so after a short perusal of the options I decided to buy a mixed dozen of the fatayer(s).  I’m not sure how that should be pluralized.  And because I’m not leaving a bakery without something sweet I got a couple of the pistachio baclawa (yes that’s how they spell it).  I was given a ticket and directed to the market side to pay for it so I walked around the market for a bit and picked up some coffee and twigs as you can see further down the post.

The twelve fatayer consisted of two of each of the six types they carried and were easily enough for 3 meals.  Not bad for $12.99.  For lunch I had a soujok, chicken, spinach & feta, and beef.  These I just pulled out of the bag and ate as was.  First let me say the bread was great.  It was heartier than a pastry dough and a bit more dense than a straight up bread dough.  Each filling had a distinctive shape.  The half moon was filled with soujok, a spicy sausage.  It did have a little heat to it and was slightly greasy and bled through the bottom of the dough.  It was tasty though.  The closed pinwheel looking one was filled with ground chicken and something I’m not sure of but it was good.  The spinach and feta was square with an open center.  This was one of my favorites.  The feta was mild and paired with the spinach in an almost creamy consistency.  You got a nice taste of the slightly bitter spinach, the mild cheese and the sweetness of the bread.  Very nice!.  The beef also had an open center.  There was a touch of spiciness to this one as well as a bit of green pepper to enhance the beef.  I tried the other two for dinner along with a couple of reruns.

I smartened up at dinner and popped these in the oven for 10 minutes to warm them up and it did enhance the experience.  The triangular one was spinach filled.  This was probably my least favorite of the six but still not bad.  The spinach filling had some olive oil and lemon juice that gave it a tart flavor.  The canoe shaped one with the open center was plain cheese and was very good and in the top two for me.  It was very simple with bread and a mild, buttery flavored cheese.  I’d be happy to have any of these again but uncharacteristically I think two of the non-meat options were my favorites, the spinach & feta and the plain cheese.

I didn’t forget the pistachio baclawa.  This wasn’t as sweet as most of the Greek baklava I’ve had but it was still plenty sweet and the pistachios were a nice little change of pace and added color.  They also had walnut and almond variations as well.

As I mentioned I walked around the market and saw lots of middle eastern groceries in Arabic that I had now idea what it was but I did see coffee that had cardamom that looked interesting so I grabbed a bag and at the register they had natural licorice root that was really twigs to chew on but still worth the few cents they cost.  So on the coffee brainiac here missed the part, in English mind you, that said Turkish coffee.  That stuff was ground quite fine.  I have a couple of fill-it-yourself K-cups so I thought what the heck let’s try it.  Let me save you some trouble if you ever think the same, don’t do it!  The Turkish coffee and Keurig did not play well together.  The grounds packed so tight against outlet that it took like 10 minutes to fully dispense 8 ounces.  On the upside the coffee was nice and strong with a serious cardamom kick.  The other downside was cleaning the K-cup of the sludge.

As I said I’d definitely visit this place again and they have a number of other middle eastern items to try plus personal size pizzas for those who might not want to go out too far on a limb.

You can find a recipe for a fatayer on the Tell Me More page, along with some music, random facts and Amazon search results for Syria.

Sadly this was the last Food Truck Friday of the year so there was no way I was going to miss it.  It also marked the opening of the ice rink that will stay up through mid-January.

As normal I stopped by the beverage tent and acquired a beer to sustain me while I perused the offerings of the trucks.  The selection of beer wasn’t as great as previous weeks but they did have a Harvest Lager that seemed appropriate for a cool November evening.  After sufficient perusing I settled on the Comfort Food truck as they had a couple of different items that looked good.  Standing in line I met a local attorney who happened to be a Gamecock fan and it naturally came out that I was a Dog fan and we still managed to maintain a cordial conversation.  Politicians could learn from our example.  Anyway, I decided to try the Mango Jerk Chicken w/ yellow rice and mac & cheese.

The chicken was great.  The mango flavor was very understated but the jerk sauce was very much in evidence.  The chicken was fall off the bone tender too.  The yellow rice was actually spicier than I would have expected but tasty too.  The mac & cheese was surprising because they used pasta shells instead of the traditional elbow macaroni. It was good, not great.  While I ate the Fantasy Band was treating us to music that made it understandable why they are a popular wedding band.  There were some Commodores & Sam Cooke that I recognized and others I didn’t but they all had a nice beat and you could dance to them if that was your thing.

After the meal and on the way out I decided to grab a little something for later at the JessKakes truck.  My plan was to get banana pudding but they had sold out so a jumbo red velvet cupcake was plan B.

Overall it was a fine evening of good food, drink and music.  It’s going to be a long few months until food truck season starts again next year.

From Oktoberfest last blog I took the culinary-passport east to Pakistan via Zafram Kabab Palace.  I was actually trying to find a place that served Afghan cuisine and this place popped up but the best they really had that I could see was something they called Afghani rice with a couple of dishes.  Instead they mostly had Pakistani and Indian food and that’s what they advertise.  I decided what the heck I’d try them out.

They started out with a big downgrade from me.  I got there at 11:30, which is the opening time on their website, on their door and at least two places inside the restaurant but they were not yet opened.  There happened to be a family of folks from somewhere in southeast Asia who got there before me and were waiting as well.  We all sat in our cars for about 5 minutes and then they got out and stood around the door, at this point they had a few more join the initial crew so there were 8 of them.  One guy got impatient and banged on the door when he saw someone moving around inside.  That person unlocked the door and while I didn’t hear the whole conversation I saw one of the women tapping her watch and heard the guy say “12:00 o’clock”.  Every one of us immediately looked at the sign on the door that said 11:30 and then back at him like he was nuts.  We got in though and waited while they stocked the buffet.

The buffet was apparently the what they expected everybody to have because there was no offer to bring a menu or even a casual wave of the hand at the huge pictures of their food hanging from the walls.  At this point I was kind of just wanting to eat and leave so I decided to go with the buffet, in spite of the fact they didn’t have any damn kababs on the buffet.

The picture above was my second plate.  The first one I had a bit of goat biryani, white rice and chicken kadhai and some vegetable pakora.  The kadhai was chicken in a spicy tomato gravy and was quite good.  The pakora was essentially a battered potato slice along with a bit of other vegetable stuck to it and deep fried.  The second plate I had tandoori chicken pieces (they cut those chicken pieces very oddly), some white rice and pakora in a yellow curry gravy along with some naan to sop up the plate.  I didn’t catch the name of the yellow veggie stuff but it was suggested by the guy running the front who had become quite solicitous once everyone got in and got seated.  He came over a couple of time to make sure everything was good and on the first trip I got him to hook me up with a mango lassi, one of my favorite drinks.  The orange pile on the plate is gajar ka halwa, a carrot based pudding kind of thing.  The carrots were grated small and almost granular so it had an interesting texture.  It wasn’t as sweet as I thought it was going to be at first, which was good.

Overall the I’d give the place good marks for the food but they lose some for their apparent disregard for time and schedules and the initial greeting from the front man.  He made most of those back after the fact but first impressions do matter.

There’s a good recipe for kheer and a nice video on the Tell Me More page so check it out.

Next week is the last food truck Friday of the year so I’m going to have to go hard at finding new countries or new restaurants for old.